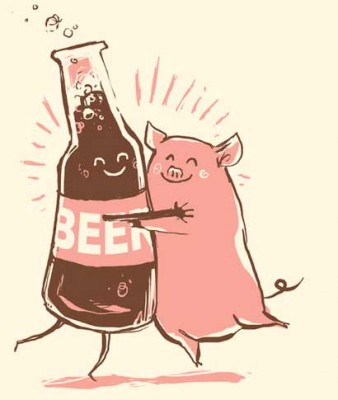 Summer is the perfect time to pop open a beer from your favorite Flagstaff brewery and barbeque some brats, burgers, ribs, and pork chops. But before you throw your meat onto the fire, how about soaking it in some beer?

Beer is both a delicious beverage and an excellent way to marinade your meat. So instead of brushing some store-bought sauce, consider glazing your meat with your brew.

Beer is slightly acidic. This helps soften the meat fibers and lets you enjoy leaner cuts that are often too tough to eat.

Wine and vinegar-based marinades don’t do the trick. Beer complements and even enhances the natural flavors of the meat.

Cooking raw meat at high temps develops cancer-causing chemicals called polycyclic aromatic hydrocarbons (PAHs) on the meat, hiding within the juices and fat that drip down the meat while grilling. When you marinade your meat with beer, the antioxidants and polyphenols in beer target the PAHs. In other words, marinading your meat in beer releases the good substances to fight off the bad substances. That’s why if you marinade with beer, it’s important to soak your meat for at least four hours.

Here’s How To Marinade With Beer

For what meats do you apply beer marinade? Share your recipes below.